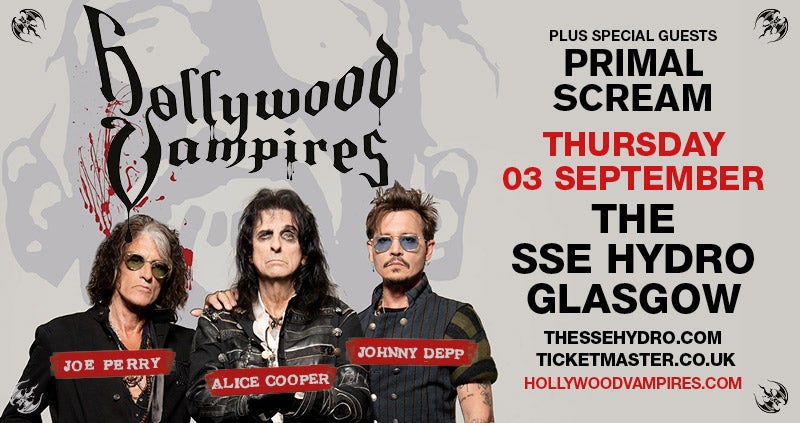 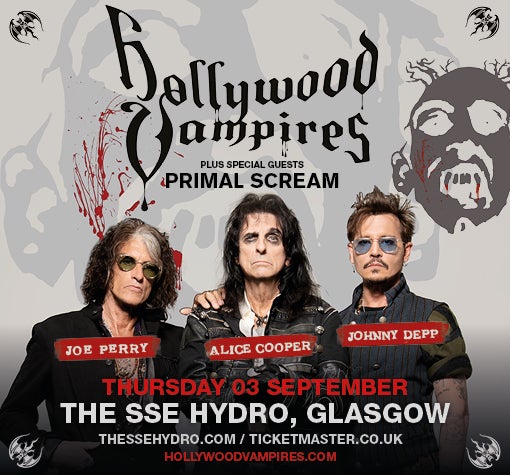 Taking in Leeds, Glasgow, London and Birmingham, they will be tearing up a venue near you in September next year.  The three legends first came together to record in 2015, bonding over a shared love of their favourite songs and a desire to celebrate their ‘dead, drunk friends’ by playing the songs of the fallen heroes.  Riotous performances ensued around the world.

Alice Cooper, “This show has something for everyone.  I like to joke that The Vampires are the world’s most expensive bar band, but what a lot of people don’t realise is that this is a real rock band, not just some novelty.  I wouldn’t keep doing it if it weren’t such a great band.  Everybody gets along, the musical chemistry is as good as it gets and the show will be the highest energy hard rock shows you will see all year.  I never get tired of playing with these guys!"

Joe Perry, “I’m looking forward to be getting back on the road with the guys in the Vampires this summer. It’s going to be great to get to play a bunch of tunes from our new album as well as a few from our dead, drunk friends. The last tour we were firing on all cylinders and it’s because of the great support from our fans that we really push the pedal to the floor. You can expect much of the same in September. We can’t wait to get over and prove it.”

Joining Hollywood Vampires are special guests Primal Scream a band that has demonstrated a savvy for keeping themselves current throughout their 30-year career. Their latest album, Chaosmosis was a top 20 success, while their live performances show no signs of slowing down either. Frontman Bobby Gillespie continues to wield a striking presence, leading his iconic band through their extensive back catalogue from the Mercury Prize winning Screamadelica and Vanishing Point to XTRMNTR and the David Holmes produced More Light.

Earlier this year, Hollywood Vampires completed a triumphant seven-city North American tour which included a sell-out show at the famous Greek Theatre in Los Angeles and were voted the “best performance” of 2018 at London’s Wembley Arena.

An exclusive glimpse behind the scenes on the road can be found in the video taken from the recent album “I Want My Now”.

The 16-track album “Rise,” produced by Tommy Henriksen and the Hollywood Vampires, is one of the purest, most unapologetic and enjoyable rock and roll albums of the year, made by masters of the craft and true fans of the form. Unlike their 2015 debut record, the new album consists mainly of original material, written by the band. There are however, in the spirit of the Vampires’ original mission, three covers of songs originally written and recorded by legendary rockers who died far too young. “Rise” has been released on earMUSIC this June.