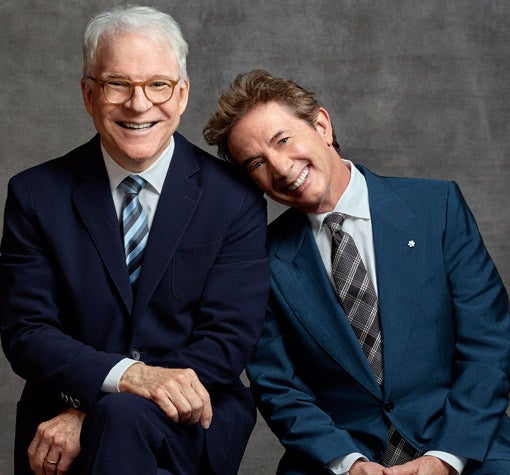 Comedy icons Steve Martin and Martin Short will bring their critically acclaimed tour The Funniest Show in Town at the Moment to Glasgow for the first time in March 2020.

This celebrated show from two of the funniest, most influential and much-loved talents of the past century follows their sold-out tour An Evening You Will Forget for the Rest of Your Life, which was filmed for a Netflix special that earned rave reviews and garnered four Emmy nominations.

Their brand of humour is an often subversive but always joyous self-deprecating romp from two comedy masters driven to make each other laugh as much as the audience. The jokes come at you at a rapid-fire pace as they mock Hollywood and the fickle nature of celebrity, but the comedy truly soars when they lovingly (and relentlessly) roast each other.

The duo will be joined on stage by Grammy Award-winning bluegrass band The Steep Canyon Rangers.

The UK represents more to us than a long flight. It is the comedy motherland.

Steve Martin is one of the most well-known talents in entertainment. His work has earned him an Academy Award®, five Grammy® awards, an Emmy®, the Mark Twain Award, and the Kennedy Center Honors.

Martin began his career on “The Smothers Brothers Comedy Hour” (1967-1969), for which he earned his first Emmy Award for Outstanding Writing Achievement in Comedy, Variety or Music in 1969. In the mid-1970s, Martin shone as a stand-up on “The Tonight Show Starring Johnny Carson” and NBC’s “Saturday Night Live.” Martin’s films are widely popular successes and are the kind of movies that are viewed again and again: The Jerk (1979), Planes, Trains & Automobiles (1987), Roxanne (1987), Parenthood (1989), L.A. Story (1991), Father of the Bride

Steve Martin is also an accomplished Grammy Award-winning, boundary-pushing bluegrass banjoist and composer. In 2013, Martin released his third full-length album called Love Has Come For You, a unique collaboration with songwriter Edie Brickell. Love Has Come For You, won a Grammy ® for “Best American Roots Song” for the title track and inspired their musical Bright Star. Bright Star received five Tony Award nominations and also received Outstanding New Broadway Musical and Outstanding New Score at the Outer Critics Circle Awards. Martin and Brickell’s second album together, So Familiar, was released on Rounder Records and featured 12 remarkable songs that bought the acclaimed duo’s musical collaboration into fresh creative territory. Steve Martin and The Steep Canyon Rangers released a second album together in 2017 titled The Long-Awaited Album.

As an author, Martin’s work includes the novel An Object of Beauty, the play Picasso at the Lapin Agile, a collection of comic pieces, Pure Drivel, a bestselling novella, Shopgirl, and his memoir Born Standing Up. His play Meteor Shower premiered on Broadway in 2017 in a production starring Emmy Award-winner Amy Schumer, Keegan-Michael Key, Tony Award-winner Laura Benanti; and Alan Tudyk, and directed by four-time Tony Award-winner Jerry Zaks.

Steve Martin’s 2018 Netflix special with Martin Short titled “An Evening You Will Forget For The Rest Of Your Life” received 4 Emmy nominations in 2018. Martin and Short are currently on the road with their 2019 tour titled “Now You See Them, Soon You Won’t.”

Martin Short, a celebrated comedian and actor, has won fans and accolades in television, film and theater since his breakout season on “Saturday Night Live” over 30 years ago.

Short won his first Emmy in 1982 while working on Canada’s SCTV Comedy Network, which brought him to the attention of the producers of “SNL.” He became an “SNL” fan-favorite for his portrayal of characters such as Ed Grimley, lawyer Nathan Thurm and “legendary songwriter” Irving Cohen.

His popularity and exposure on “SNL” led Short to cross over quickly into feature films. He made his debut in “Three Amigos” and followed with “Innerspace,” “Three Fugitives,” “Clifford,” “Pure Luck” and “Tim Burton’s Mars Attacks.” One of Short’s most memorable roles was in the remake of “Father of the Bride” as Franck the wedding planner, a role he reprised a few years later in “Father of the Bride Part II.” Short lent his voice to the animated film “Madagascar 3” and Tim Burton’s Oscar-nominated “Frankenweenie." Short’s voice was also featured in the animated holiday film “Elliot: The Littlest Reindeer,” which was released in November 2018.

An accomplished stage actor, Short won a Tony, Theatre World Award and an Outer Critics Circle Award for his role in the revival of “Little Me.” He was also nominated for a Tony and took home an Outer Critics Circle Award for the musical version of Neil Simon’s “The Goodbye Girl.” Short co-wrote and starred in “Fame Becomes Me,” prompting The New York Times to describe Short as “a natural for live musicals, a limber singer and dancer who exudes a fiery energy that makes you want to reach for your sunglasses.” Short most recently appeared on Broadway in Terrence McNally’s “It’s Only a Play.”